1. Circle up the group, and read aloud the following Activity Challenge

Challenge: Teams of students will practice spelling words to move members through the obstacle course to score points.

2. Divide students into two teams. Explain the game to the teams.

Team A is given the word “beneficial.” Brian (in the Spelling Square) spells it correctly, and Sarah moves through the entire
course to mark a point.

Team B is given the word “meticulous.” Chris (now in the Spelling Square) spells the word as: m-e-t-i-c-o-u-l-o-u-s Since the first five letters were spelled correctly before he made a mistake, Kristen can move five sections into the course.

Now, Team A is given a chance to steal the same word. Josh spells the word: m-e-t-i-c-u-l-u-s. Since seven letters are correct, Kristen (who is still in the course) will move ahead one space for every TWO letters correct (in this case, only three spaces – no rounding up). If this gets Kristen to the end of the course, Team B wins the point. If it does not, no one wins a point, but Andrew replaces Kristen at her spot as the starting point for his team’s next word.

3. Play the game until a certain point value is won or a set time is over.

4. After the activity, move to the “Activity Discussion and Processing” section of the activity. 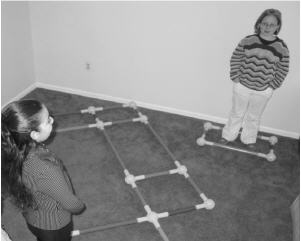 Above, a student (at right) in the Spelling Square attempts to spell a word so her teammate (left) can move into the obstacle course. 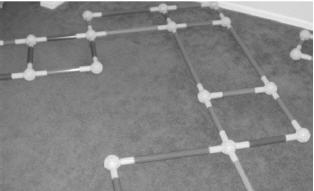 This is a sample of how a simple obstacle course could look.

1. Remove the element of competition.
Play the game in the same manner and track points. At the end of the game, however, combine point scores for a total score. After students study their words, play the game again (perhaps the next day or as a review for a test) and see if they can beat their original combined score. 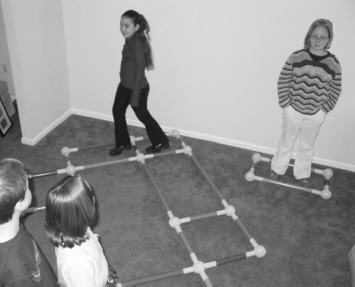