Home > Activities > You Sank My Battleshape

Each group must try to “sink” the opposing team’s Toobeez battleshapes using knowledge of the Cartesian plane system. 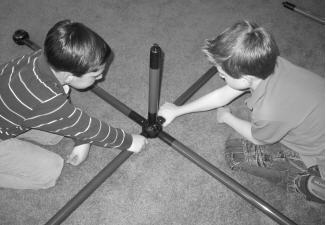 1. Construct a cross shape using four of the 36″ Toobeez tubes with one sphere in the center joining the four tubes. Also connect a sphere to the end of each 36″ Toobeez. These will serve as the X and Y axes for the Cartesian plane playing board. Teacher Note: The should be northern and eastern tube should be the same color. Likewise, the southern and western tubes should also match in color. This serves to reinforce the negative and positive values long the X and Y axes of the playing board.

2. Place one 36″ x 36″ square of chart paper or oak tag in each quadrant of the constructed Cartesian plane. Using a meter stick and marker, students should draw a straight line along the X axis every 8.6 centimeters. These lines should be parallel to each other and extend the length of the chart paper in each quadrant. 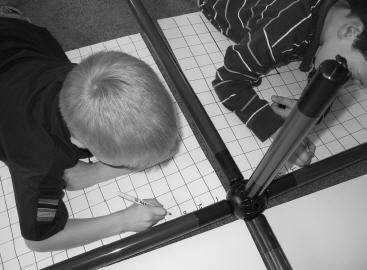 3. Have the students note the appropriate of each positive or negative values of each line along the X axis on the chart paper.

5. Using Toobeez pieces and curtains, have students construct a dividing structure, as shown, equal in length to the X axis. This partition is constructed along the X-axis by placing two Toobeez curtains vertically on each side and then rolling up the curtain from the bottom to tighten. This partition will divide the Toobeez Cartesian plane playing board in half. You are now ready to play Toobeez Battleshapes. 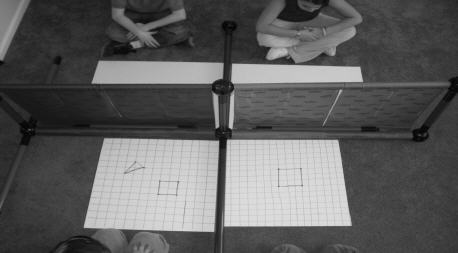 6. In addition to using the Toobeez game board, each student should be provided with a sheet of graph paper.

1. After dividing students into teams, each team should construct three two-dimensional geometric models using Toobeez (one triangle, one square, and one pentagon) to serve as their battleshapes.

Challenge: Each group must try to “sink” the opposing team’s Toobeez battleshapes using knowledge of the Cartesian plane system.

4. After plotting all three battleshapes, each team should also write the coordinates of each point on their team’s playing board for their own easy reference during play.

5. Taking turns, teams should call out coordinates in the appropriate manner (X,Y), and be mindful of positive and negative values.

6. If a team calls out a point that corresponds to the plotted point of an opposing team’s battleshape, it counts as a hit. Whenever a team guesses all the plotted points of an opposing team’s shape, that shape is considered to have been sunk. Guesses that do not coordinate with the plot points are misses but can aid in the process of elimination to guess the correct coordinates.

7. From the coordinates they call, team members should record their hits and misses on both the playing board and their personal plane handouts to prevent recalling the same coordinates.

8. The first team to sink all the opposing team’s battleshapes by identifying their plot points wins!

9. After the activity, circle up the group and ask them the following question: “How does the Cartesian plane coordinate system work?”

Here are some additional topics for class discussion:

Increase the sizes of the battleshapes used by each team. For example, use hexagons and octagons. 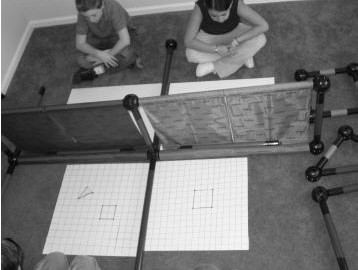