Analyze two stories to determine both similar and differing elements between the stories.

Discuss the following concepts with the group before beginning the activity. Have students recall times when they had to compare or contrast something in their life.

Challenge: Analyze two stories to determine both similar and differing elements between the stories.

3. If students are going to read both stories for the first time, divide students into two groups. Provide each group with one of the books, and have students in each group take turns reading the story aloud.
Teacher Note: Groups should move far enough apart so as not to be distracted by the other group’s reading. Teacher Note: See the “Helpful Hints” section above for other reading options.

4. Once reading has been completed, regroup the students and place the Toobeez diamonds in the middle of the circle with the two corners overlapping (they should look like overlapping diamonds). Arrange students around the Toobeez.

5. Label one Toobeez diamond for each book title using a sentence strip.

7. For each question, have students determine if the group’s responses are similar or different. If they are similar, place the similar-statement sentence strips (one on top of the other) in the center of overlapping Toobeez. If they are different, the responses should go in the larger open part of the Toobeez square under the corresponding book title.

8. When the Toobeez are filled with as many responses as possible, review how the books were similar and how they were different.

9. After the activity, move to the “Activity Discussion and Processing” section of the activity. 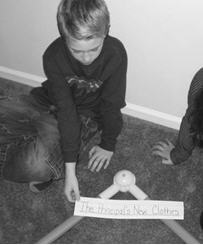 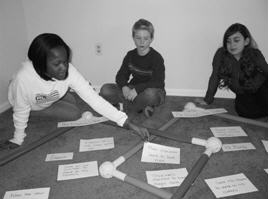 Label each diamond with the book title and place cards in the diamonds. Place similar traits in the
overlapping center space.

Tape the large, overlapping Toobeez diamonds to the wall to track and display similarities and differences of a classroom novel as the class works through an entire book. You could also use this method to emphasize character development by comparing and contrasting characters between or within books.

This activity can extend beyond reading and be applied to content areas, such as Social Studies, to compare and contrast information. You can also apply this technique for non-fiction sources such as textbooks, magazines, pamphlets or any other research resource. 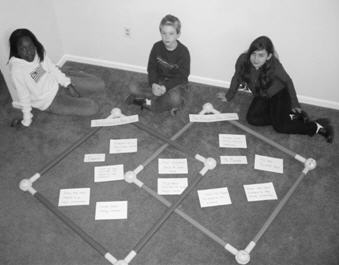