Cảnh báo Cookies are used on this site to provide the best user experience. If you continue, we assume that you agree to receive cookies from this site. OK
My Account
Đăng nhậpĐăng ký
Vietnamese

About Us About Us

“We were intrigued by its potential as a teambuilding training aid.
TOOBEEZ clearly meets the tough guidelines imposed by facilitators of experiential learning.
We were amazed by its solid construction and simplicity.
We plan on using Toobeez for many years to come.”
Peter Grazier - President, Teambuilding, Inc. 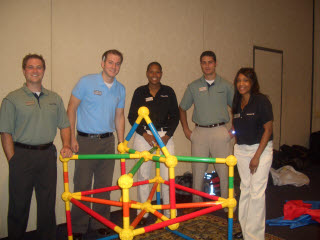 "The kids "ATE IT UP", as the saying goes! Our kids are a mixed population from 12-17 year olds who are severely emotionally challenged, and their diagnoses can be greatly varied. Our goal is to make school here as positive and successful an experience that we possibly can.  We split the kids into two groups. I stood a large mat on its side, so that they couldn't see each other's ideas. I simply asked them to "build a house".

They INSTANTLY kicked into cooperation mode.
They were communicating ideas, you could almost hear their minds working.


Everybody is using them in a different way, because they are 100% open ended.
Here are just a few examples…

Can you see the potential?