Float through outer space by following the path. Once you reach a station, catch or blast as many meteors as you can.

Below are the following details:

A. To construct the rocket ship:

Step 5
Connect the triangle from Step 4 to the front of the rocket ship. Add the curtains from Step 3 to make two walls. Then, add the last 24“ tube to make the top

Step 8
Be sure the equators of the connecting spheres are facing upward.

Step 9
The rocket ship is ready to board!

B. To construct the meteor catcher:

2. Attach a Toobeez curtain from the left side to the right side of the square, and let it hang beneath the square like a basket

3. Attach the last Toobeez curtain from the top of the square to the bottom. It will hang around and below the first curtain. This will be the meteor catcher.

C. To construct the meteor blaster:

Attach a sphere to each end of a 16” tube and place it next to the “moon” (therapy ball). This will be the meteor blaster.

D. Setting up the room:

1. Create a triangle with the three stations.

2. Place the rocket ship as far away as your rope will allow you from the swing

3. Lay the piece of rope or Thera-band on the floor leading from the rocket ship to the swing

4. Place the meteor catcher next to the swing.

5. Place the therapy ball “moon” as the third point in the triangle.

6. Connect the swing and the therapy ball with a piece of rope/Thera-band, creating a trail on the floor between the two stations.

7. Connect the therapy ball and the rocket ship with the third piece of rope/Thera-band from Step #3.

8. Place the bean bags in front of the swing.

9. Place the five balloons in front of the therapy ball.

1. Instruct the child to climb into the rocket ship and sit down on the floor to wait for the directions.

2. Read aloud the following Activity Challenge Box to the astronaut.

Challenge: Float through outer space by following the path. Once you reach a station, catch or blast as many meteors as you can.

3. Children are to count backward from ten to one and then shout “Blastoff!”

5. Once in outer space, the child should follow the rope to their outer space experience (bend down, pick up the rope, and follow it to the swing).

6. The child should then climb on to the swing with assistance from the therapist as needed. Hand the child the meteor catcher. The child is now lying prone on the platform swing (or in the net swing) with arms extended and holding the meteor catcher (see “Therapist Notes” on the following page if there is a concern with lying prone.)

7. Swing the child in linear motion (forward and backward). The child should remain facing forward and facing the therapist. 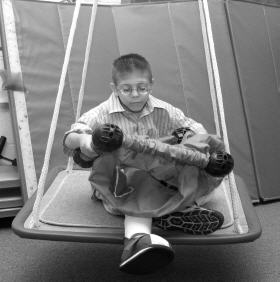 8. The therapist should then position him/herself in front of the student with the basket of bean.

9. Toss a bean bag or balloon (meteor) one at a time toward the child while he/she is swinging. The child is to catch the “meteors” in the meteor catcher. Make it a game and try to catch three, five or ten – let the astronaut decide!

10. Once the child catches the number of meteors he/she set out to catch, request that the child slow him/herself down until stopped. Have the child climb off the swing and follow the rope leading from the swing to the therapy ball.

11. With the meteor blaster in hand, have the child sit on the moon, making sure that his/her feet are firmly planted on the ground. The child can then begin to bounce on the “moon.” The therapist should reposition him/herself in front of the child once again.

The up and down motion of bouncing on the therapy ball and the linear to and fro movement on the swing both provide a different type of vestibular stimulation to the child’s nervous system called oscillation.

12. Again, ask the child to identify how many meteors he/she is going to blast. Setting goals and achieving them is a great self-esteem booster!

Instructing the child to hold on to the meteor blaster with two hands allows both sides of the body to work together. By facilitating crossing midline on both sides, both hemispheres of the brain are speaking to one another, and the child’s brain is preparing to complete complex tasks such as reading, comprehending, handwriting, moving and thinking simultaneously.

14. Once the child reaches his goal of blasting meteors, have the child follow the rope back to the rocket ship for a cool down, countdown. 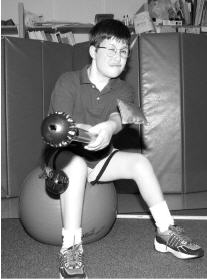 15. When then child is in the rocket ship, ask the child to sit on the floor and slowly count up from one to ten. When the child is finished counting, give a couple of extra moments for the child to prepare for the transition to his/her next task. Therapist Tip: If a child demonstrates difficulty calming him/herself, try wrapping the child in the weighted blanket to provide calming deep tactile input to the child’s body.

16. When the activity is complete, move on to the Discussion and Processing questions.

For children who do not enjoy lying on their stomachs or present with g- or j-tubes, have the student sit upright in the swing to promote active sitting (since the child will be moving while he/she is sitting). Active sitting requires core muscles in the trunk to contract in order to maintain balance while moving. This is also good for children who present with hypotonia/low muscle tone in their trunk. Strong trunk muscles are important because they help with proper posture needed for sitting or walking upright. Good upright posture allows our organs to function properly and ensures that our diaphragms are able to move appropriately so deep breaths can provide adequate oxygen to the brain. As a result, students are calm, organized and ready to learn.

Use the questions below as a guide for your discussion. Select the questions you feel will best benefit your child/student. It is not mandatory to cover every question. Make sure to let everyone share their ideas, and remind participants that everyone’s opinions and feelings are important!
Work through the following questions:

1. Change the direction of the meteors.

3. Involving children who use wheelchairs.

Create a rocket ship large enough to place the wheelchair on the inside. You will need to use four 36” tubes as the base of the rocket ship. Eliminate the need to roll over a tube with the wheelchair by removing one tube to create an opening so the wheelchair can easily move through. Complete the countdown and then wheel the student to the swing. Safely transfer the student into the net swing or Cuddle Swing® (or another swing that the student is comfortable using). Therapist Tip: Please ask another staff member to complete a two- man transfer if the child is unable to bear weight through his/her lower extremities. If the child is lying supine in the net swing, hold the balloon meteor from above (at an appropriate distance corresponding to the child’s active range of motion in his/her upper extremities) and ask the child to reach out to touch or bop the meteor with is/her hands.

4. Involving children who use wheelchairs (outdoors).

Build a Toobeez rocket ship large enough to accommodate the wheelchair. This will require more than one Toobeez set, as the frame of the rocket ship will need to be built with all 36″ tubes. Complete the countdown. If your facility has a specific wheelchair swing (a platform on to which you can wheel the wheelchair and lock it in place so the child is able to swing while in his/her wheelchair), take the balloon meteors and try to hit them back and forth.

Build a Toobeez rocket ship large enough to accommodate the wheelchair. Complete the countdown as stated in above activity. Either place the child in a wheelchair swing (seated in wheelchair) or complete a two-man transfer to a net swing or Cuddle Swing®. Use bubbles as meteors for an added sensory experience while in the swing!

6. For children who are nonverbal.

If a student has communication goals that require them to use a switch (Big Mac, Step by Step, etc.), record your voice saying “Blastoff!” on the device. After you countdown from ten to one, wait for the student to initiate the completion of the countdown by pressing the switch to say “Blastoff!” Continue with the remaining activity instructions. 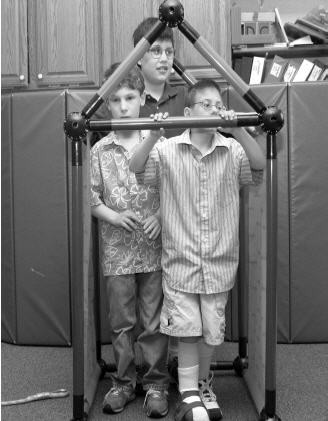 About Author
Candice Donnelly-Knox (10 Activities)
Candice Donnelly-Knox is a licensed and registered occupational therapist with over three years of experience. She has experience working with students (ages 3 to 21) with a variety of needs including Autism Spectrum Disorders, ADHD, Cerebral Palsy and Down syndrome etc. Candice is dedicated to providing each student with an individualized plan to address their unique educational needs; needs that may include activities of daily living, coping skills, reading and handwriting, and functional math skills such as money management, pre-vocational and vocational skills.
All Activities of Candice Donnelly-Knox